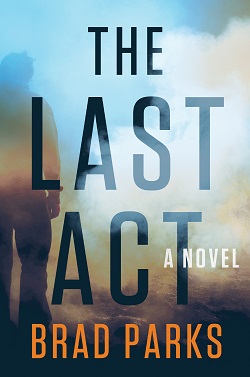 I love to find mystery authors referencing others’ works in their plots.

It’s a kind of a wink to the readers.

So I have made these references an ongoing series.

Here are some recent ones I’ve found.

The Last Act by Brad Parks (Dutton) In this highly entertaining standalone, Brad Parks sculpts a most unusual sleuth. Tommy Jump is a former child actor who had success on Broadway. But as an adult he’s only finding work with touring productions, and even those gigs are drying up. Then he is offered a challenging acting job—go undercover in a prison to befriend an inmate who was a banker for a cartel. Tommy also is reader who loves to bury himself in a book. His latest read is the thriller Say Nothing, “by an author I had never heard of,” says Tommy. Well, Tommy may not have heard of this author but Brad Parks knows him very well. Say Nothing is by Brad Parks himself. Nice product placement there.

The Knowledge by Martha Grimes (Atlantic Monthly Press) Superintendent Richard Jury’s questions about Native American culture, gambling, and the rise of casinos sparks a discussion with Alfred Wiggins, his dependable sergeant. Wiggins suggests Jury read a Tony Hillerman mystery “and went on in this vein until Jury shut him up.”

The Outsider by Stephen King (Scribner) A character talks about picking up the latest Harlan Coben “barnburner” and attending Coben’s discussion at his book signing.

A Season To Lie by Emily Littlejohn (Minotaur) The death of a well-known writer fuels the plot of this second novel about Colorado police officer Gemma Monroe. So, naturally, literature comes up a few times. One character discusses reading “an early Agatha Christie.” She offers her take on mysteries. “The thing about mysteries, unlike life, is that they are never about the killer, or the victim, or even the detective, really. In the end, they’re all about the puzzle. And the joy of reading a mystery comes from the riddle within the riddle, you see. If you solve the puzzle before the detective, it’s much more fun.” I disagree with that statement, because mysteries are all about the detective and her or his search for identity—how the mystery is a part of the social fabric of the community. Very few mysteries are only about the puzzle, and that is why the genre is so important.

The Man Who Came Uptown by George Pelecanos (Little, Brown) Pelecanos’ latest novel is about the relationship between a prison librarian and an ex-con. So it’s reasonable there would be references to real novels. Here’s two:

Librarian Anna and prisoner Donnell discuss the plot of Lisa Lutz’s The Passenger. “I can see why this book was popular,” says Donnell. “’Cause, you know, the idea that you dye your hair a new color, cash in your bank account, change your ID cards, and disappear into thin air? It’s kind of everyone’s fantasy, right? To have a new start?”

And on the same page, Anna tells Donnell about another book. “Anna took another book off the cart. It was one of Wallace Stroby’s crime novels about a thief named Crissa Stone. ‘Try this one. It’s got a female protagonist. Written by a man but he gets it right.’ ”

Stroby has four novels about Crissa Stone, including The Devil’s Share and Cold Shot to the Heart.