11 OUT OF 13 FOR THIRTEEN
Oline H Cogdill 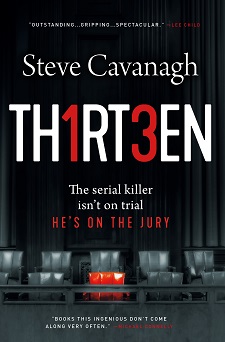 Those of us who review mystery fiction also receive press releases explaining why we should take another look at a particular novel.

I found a release accompanying Steve Cavanagh’s Thirteen (Flatiron) rather effective because it gives tidbits about the book and the author, at left. The tagline to Cavanagh’s fourth novel says it all: “The Serial Killer Isn't on trial... He's on the Jury.”

That tagline may attract readers and they will not be disappointed by the involving plot, a creepy bad guy and a flawed hero. Action is well placed and the novel offers an interesting look at the legal system.

And since the novel is titled Thirteen, the publicist included 13 reasons to highlight it. I’m only including 11 of those reasons.

1) The TV and film rights to Thirteen were recently bought by Topic Studios, which has produced TV's shows like Netflix's thriller The Fall.

2) A No. 1 bestseller in Ireland and a Sunday Times bestseller in the U.K., Thirteen has been shortlisted for two prizes: the CWA Ian Fleming Steel Daggar Award and the Theakston Old Peculier Crime Novel of the Year.

3) In the U.S., it has two starred trade reviews from and PW and Booklist, as well as rave reviews from Mystery Scene and the Associated Press.

4) It's been included in three most anticipated books of the summer list, including the Minneapolis Star-Tribune, who called it "cleverly plotted thriller" and "a blockbuster"

5) Thirteen is the fourth in his series that features former con-man-turned defense lawyer Eddie Flynn, who the Irish Times described as “Jack Reacher’s younger, hotter-headed brother.”

6) The book also features Joshua Kane--one of the summer's most sinister serial killers, akin to Ted Bundy, who frames a movie star for the murder Kane committed and then kills to get on the trial's jury. 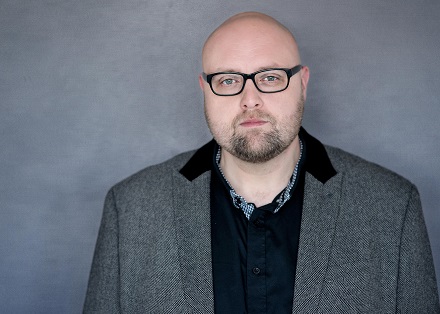 7) Cavanagh came up with the novel's hook--"The Serial Killer Isn't on trial... He's on the Jury."--before he even wrote one sentence of the story.

8) Born and raised in Belfast, Cavanagh was one of Ireland's most notable civil rights attorneys before he retired to focus on writing. He was involved in several high profile cases, including a 2010 case in which he represented a factory worker who suffered racial abuse in the workplace and won the largest award of damages for race discrimination in Northern Ireland legal history.

9) Cavanagh inadvertently signed up for law classes: The morning Steve was to sign up for degree classes at university in Dublin, he was severely hungover, got disoriented, and signed up to study law instead of business/marketing as he planned.

10) The idea for Eddie Flynn, the conman-turned-defense-lawyer, came to Steve in the middle of a trial. As he sees it trial lawyers and con artists share the same skills – persuasion, misdirection, distraction, manipulation. Eddie cons juries, judges and prosecutors – but he’s always doing it for the right reasons.

11) Although Thirteen is set in Manhattan, Cavanagh had never even vacationed in New York City before writing the first two books in the Eddie Flynn series, The Plea and The Defense.