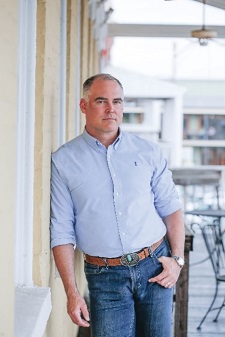 The Revelators (Putnam) marks the 10th installment of Ace Atkins series about Quinn Colson, sheriff of Mississippi’s Tibbehah County. Expect a lot of changes in Quinn’s life and the county’s landscape. The Quinn Colson novels have been nominated for an Edgar Award twice for best novel—The Lost Ones (2013) and The Ranger (2012). Atkins’s short story "Last Fair Deal Gone Down" received an Edgar nomination in 2010.

A former newspaper reporter for the Tampa Tribune, Atkins published his first novel, Crossroad Blues, at age 27, eventually becoming a full-time novelist at age 30. He also is the author of eight New York Times-bestselling novels in the continuation of Robert B. Parker’s iconic Spenser series.

Mystery Scene caught up with Atkins to discuss his decade writing about Quinn Colson. The plan was to have 10 questions for 10 years of Quinn. Instead, we got a bit carried away.

Oline Cogdill for Mystery Scene: A decade of writing about Quinn Colson, a former U.S. Army Ranger is a milestone. When you first started writing about Quinn, had you planned to have this long a series?
Ace Atkins: I have to give credit to writing a series to my former editor, the legendary Neil Nyren. Neil has worked with everyone from Tom Clancy to Clive Cussler to C.J. Box. At the time, I had no intention of ever writing a series again as I continued working on standalone novels based on true crime stories. But Neil was intent on me creating something contemporary and set in the Deep South, since we realized there really wasn't a continuing hero based in my home turf. The long game was to create a world where we could have limitless adventures. And while I didn't think too far in the future, I definitely hoped we'd still be talking about Quinn ten years later.

How did you come up with this character? Is he based on any one person?
At the time, about 2009, I saw a lot of vets coming home from Iraq and Afghanistan going back to work and resuming their normal lives. It resonated with me as a timeless/classic idea. The basic premise of a solider coming home from war and finding his small town in shambles made sense to kick off a series. Quinn's story isn't that different from Odysseus.

I really had the idea of Quinn—a stoic, classic American hero—before I began the research. I wanted a character who combined traits of some of my favorite heroes—the social consciousness of Billy Jack and the strong sense of justice in Buford Pusser. But much of what Quinn saw and did as a soldier was based on one Army Ranger I interviewed while writing the book. I owe all the realism of Quinn's backstory to him. I wish I could talk more about him, but he's asked to remain nameless as he joined Special Forces about that time. He's basically been there and done that. A truly humble and cool dude. 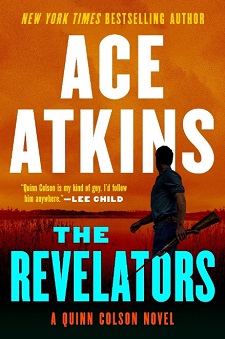 Quinn has gone through a lot of changes in the series. What are you most proud of regarding this character?
Quinn has evolved as the series has gone on. He is a moral hero, but he's also made some questionable decisions, most notably getting involved with his high school girlfriend, who was a married woman. He also tried to make things right with his father, and then grew up and realized that, that might never happen. But he's gone on and endured, knowing that he can't fix everything or make everything right. He's also gotten married, adopted his wife's child, and is now expecting a child of his own. Ten years, especially between the ages of 30 and 40, can bring a lot of changes to a man. Evolution of character is what makes series exciting to me.

Quinn has also developed more of a sense of humor as the series has gone on. He's not as quippy as Spenser but has more of a wry, dark take on things. I was inspired a lot by the humor of James Garner. I only wish Garner could still be around to play Quinn on TV. He's who I always have in mind as I write.

You have some rich villains in your series, do you have a favorite villain?
Definitely Johnny Stagg, the OG. There wouldn't be a series without Stagg, the owner of a Southern backwoods truck stop with a strip club side hustle. His naked ambition, social climbing, and criminality made the series as much as Quinn. One reader aptly called him the "redneck Moriarty." I really miss that guy. I'm hoping he'll be back one day.

I am partial to Fannie Hathcock. She’s a self-made, successful businesswoman who has to prove her mettle almost daily within the male power structure. She sometimes shows compassion, but at the same time is ruthless, will eliminate anyone who gets in her way— even if she cares about the person—and exploits women. Tell me who this character is to you?
Fannie is ruthless, but I hope readers also understand the swamp she had to crawl out of to become rich and successful. Over several books she's built an empire and will do anything to protect it. I think she's someone who'd been abused and used all her life and decided to make the most of what she's learned. At her best, she's a character who's taken about all she can from men and decided to best them at their own game.

Of course, there wouldn't be a Fannie Hathcock without the real-life Louise Hathcock, who famously battled Buford Pusser back in the day. I'm also a big fan of movies from the Great Depression, particularly from the years 1933 through 1934. There's an excellent film with Barbara Stanwyck called Baby Face that formed a lot of Fannie's character. And also a wonderful Western from 1954 called Johnny Guitar, starring Joan Crawford that has a ton of Fannie in it. Crawford's character's name is Vienna and that inspired Fannie's modern saloon, Vienna's Place. The way Crawford stands on the catwalk above the action is all Fannie. 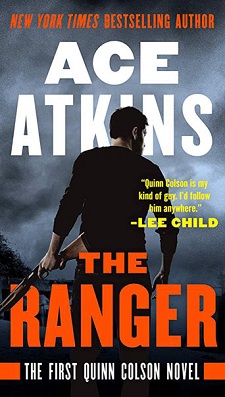 You surround Quinn with some very believable supporting characters, such as his best friend Boom, his deputy Lillie Virgil, and his family. Do you have a favorite supporting character?
A: Definitely Lillie. Something always lights up in the story when Lillie comes onto the page. She's a composite of a lot of tough women I knew when covering law enforcement as a newspaper reporter. But she also has a lot of Calamity Jane, and some of my wife Angela, in her DNA. She is straight and unfiltered. I'm hoping one day she'll have her own spinoff series in her new role as a U.S. Marshal in Memphis.

The Ranger series is a combination of mystery and Western; Quinn is kind of like Shane, cleaning up the area. Are you a Western fan?
A: The Ranger series is absolutely as much a Western as a crime novel. The whole genesis was the idea that so many small Southern towns reminded me of being in the Old West. There's a town square, maybe a train station, a general store and a post office. Somewhere you'll find the sheriff's office and jail. That's where you'll find Quinn with his boots up on his desk, waiting for the next story. And obviously there would be no Quinn Colson without Shane or Gary Cooper's Will Kane. I saw High Noon as a teenager and was mesmerized by it. Right now, in these shifting times of morality and truth, that walk Cooper makes down the empty streets is more relevant than ever. Who will stand with him?

I also learned a lot by watching The Andy Griffith Show. I like to think of The Ranger books as the PG-13 or R-rated version of that classic series. As he's grown older, Quinn has definitely evolved into someone with a moral compass like Andy's. Although, from time to time, he does have to shoot more bad guys.

You’ve lived in Mississippi for how many years? Are there things about the state you are still discovering in writing Ranger novels?
I moved to Mississippi in 2001. I moved around quite a bit as a kid, so I've actually lived in Oxford, Mississippi, longer than I've ever lived anywhere. Like another place I know well, Florida, there is unlimited corruption and hypocrisy. The issues that Faulkner wrote about 80 years ago are still with us. When I first wrote The Ranger, I felt we were living in a New South where things were getting better. The bad guys—a racist paramilitary group—still had to hide and train the woods. Now, in 2020, those same types of people are marching on the town square. We're stepping back in time. While it gives me plenty to explore and write about, it's really sickening.

How much research do you do whether it’s about the Rangers, law enforcement or Mississippi?
Most research now is about the subject I'm writing about. Much of the action of The Revelators revolves around the mistreatment and abuse of Mexican immigrants in poultry processing plants. I spent a decent amount of time learning about that world before writing. But, of course, I'm always checking in with my pals here in Mississippi at the local sheriff's offices. They come to me with stories that I couldn't make up in a thousand years.

Will Quinn ever travel to Boston and meet a private detective named Spenser or will Spenser ever travel to Mississippi and meet a certain sheriff? Do you think they would like each other?
Ha! I'd love that. But I don't think the lawyers would ever be able to figure out how to make that work. But if they ever met, they'd definitely like and respect each other. Both men of honor who live by a certain code.

You had a successful string of historical mysteries. Do you ever plan to write another?
I hope. Someday. I felt that as a former reporter, I was able to bring something bold and unusual to crime readers. I have a half-completed novel set in South Florida that I will finish. Also a sequel to the Tampa-based 1950s crime story, White Shadow. But with two books a year, a Quinn and a Spenser, time is pretty tight.

Will the walls of crime ever come tumbling down in Jericho?
I think the story of that battle is answered in The Revelators. The events of book number 10 have been in the works for some time. What comes after for Quinn and company will be very different with very different, more procedural type stories. This novel is the concluding story for many series regulars.

Anything you want to add?
Mainly that I'm excited to be publishing the 10th in a series and have already signed on for more with Putnam. Over the years, I've seen a lot of series come and go, including my own Nick Travers. That may be due to the author wanting to take on new stories, the publisher not selling enough books, or perhaps jumping publishers and that publisher not wanting to promote another's backlist. But having a history with Putnam and growing base of fans for Quinn has been a wonderful thing. I love taking readers from all over the country and over in Europe and Australia down South. I'm very fortunate to have had readers follow Quinn from story to story and want to know what's next down in Tibbehah County.