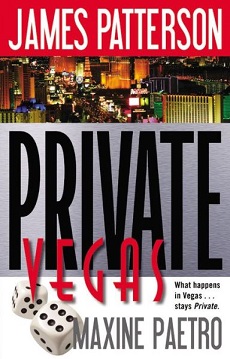 Not too long ago, it wasn’t uncommon for authors and publishers to occasionally add “gimmicks” to the packages of books sent to reviewers.

I well remember the time when I opened a box containing a mystery set around the Fourth of July only to have large pieces of glitter spray from the package. I was not a happy camper as the glitter landed on my dress, in my hair, and all over my desk. I was still finding glitter hidden on my desk on the day I left the newspaper.

And then there was the time I was at the newspaper around 10 at night, finishing up the weekly entertainment section. A box containing a book was rigged so that when it was opened fake spiders and netting made to resemble a web sprang out. I was even less thrilled.

So I thought the days of gimmicks were—fortunately—over.

But leave it to James Patterson to come up with a new idea.

If you have $300,000, you can buy his new novel Private Vegas and have quite an experience, too.

For that, a reader—and, yes, only one reader—will get a copy of Private Vegas that will self-destruct 24 hours after the buyer begins to read it.

The price tag, according to the website, also comes with a first-class flight to an undisclosed location, two nights’ stay in a luxury hotel, “a splendid reading space including perfectly chilled Champagne,” a pair of “gold, not golden” binoculars inside a fine-leather case engraved with Patterson's initials, and a five-course dinner with Patterson.

And if you prefer mixed drinks to Champagne, apparently that can be arranged. I would hope so. That much money would buy a lot of Grey Goose.

Details of how the book will be exploded are secret but it will involve a bomb squad. The video is pretty funny as it explains what may happen.

Only one “James Patterson Self-Destructing Book Experience” will be sold on “a first-come, first-served basis” and it is only for one person, according to the website.

The website also makes this statement: “We will use reasonable efforts to ensure the Experience is a happy and memorable one for you and your fellow guests for all the right reasons, however we cannot be liable for distress caused by circumstances beyond our control (including but not limited to the weather conditions).” There also are a lot of other terms and conditions.

So who would pay that much money for this experience?

Representatives of Little, Brown, his publisher, have stated that Patterson has friends who would not bat an eye at that price. And of course, what a conversation starter that “experience” would be.

OK, this is an interesting idea, but since it was announced on January 20, no one has bid on this book.

And for those of us who don’t have that kind of cash lying around the house, a regular old non-destructive copy of Private Vegas, which lists Maxine Paetro as co-writer, is available for under $30 in hardcover and as an e-book.

Patterson will be the guest speaker during Sleuthfest, the annual writers’ conference sponsored by the Florida chapter of the Mystery Writers of America.

Sleuthfest is February 26 to March 1 in Deerfield Beach, Florida, just a little north of Fort Lauderdale.

And remember, Sleuthfest is in Florida and it is February.