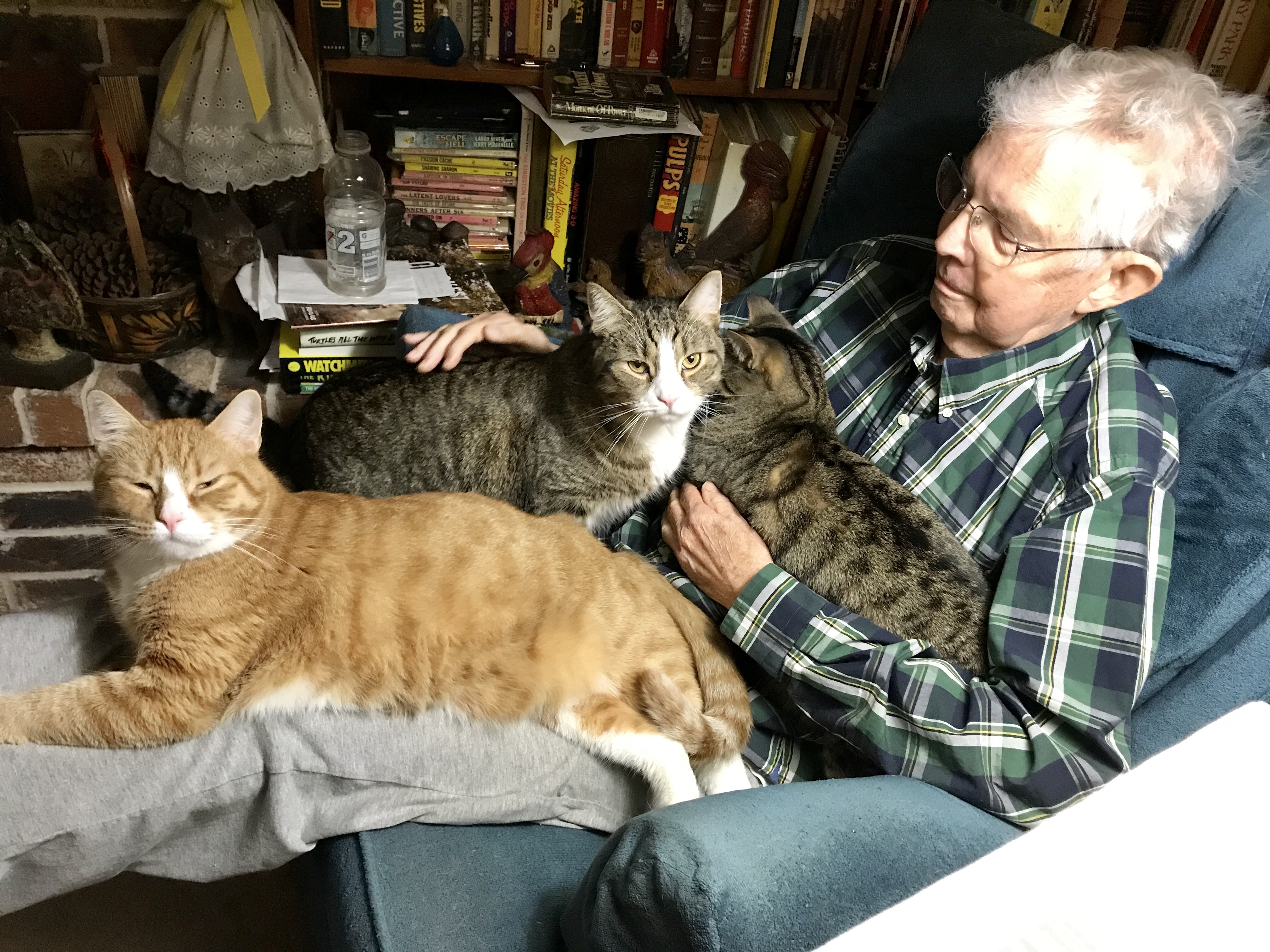 A celebration of one of mysterydom’s favorite writers.

Bill Crider is a man with three cats, many books, even more friends, and few regrets.

The widely published 76-year-old author informed his blog followers recently that he had been given a few months—or even weeks—to live. Prostate cancer had spread. Facing a finite number of days, at home in hospice care and surrounded by his books and his family—daughter Angela and son Allen—Crider was too ill to get out for his weekly Sunday School class. Characteristically, the prolific writer was still thinking about books, fellow writers, and readers.

“My only regret is that I have several unreviewed books, including Lawrence Block's fine new anthology, Alive in Shape and Color, and Max Allan Collins' latest collaboration with Mickey Spillane, The Last Stand, which is a collection of two novellas, ‘A Bullet for Satisfaction,’ an early Spillane manuscript with an interesting history, and ‘The Last Stand,’ the last thing that Spillane completed,” he wrote in his blog.

For many years, Crider also reviewed short stories for Mystery Scene magazine. “Bill is so knowledgeable about the genre and so witty in his appraisals. We were very lucky to have him as a contributor. He has many friends at the magazine,” said Mystery Scene editor Kate Stine.

Characteristically generous with his reviews and fellowship, Crider has high praise for fellow members of organizations like the Mystery Writers of America, and the smaller Western Fictioneers.

“There are so many novelists who inspired me the list would take all day ... there are literary novels I have loved, mystery, adventure, science fiction—there’s an endless list,” he said in a December 6 interview. “I’m dazzled by all of them.”

Young Billy Crider had no inkling that he would grow up to be an author. His Mexia, Texas boyhood dream (and that of many of his peers) was to to find gold on the diamond as a major league ball player.

“I turned out to be half blind, totally uncoordinated, skinny and slow—none of which are highly sought qualities in a baseball player,” Crider recalled with a smile. Instead he got an undergraduate degree at the University of Texas at Austin, and then a master’s at the University of North Texas, and a PhD from UT-Austin. All the degrees were in English. (“There’s a pattern there,” he admits with his trademark dry wit.)

Crider taught first at Corsicana High School while his wife Judy finished her college, then at Howard Payne University and finally, 19 years at Alvin Community College, where he was chair of the English department and chair of arts and humanities.

Doing poetry in a writers’ group at Howard Payne, the idea of fiction came up.

“A man at the group didn’t write, but he told me that he thought that he thought he and I could write a novel. He wanted us to write a Nick Carter spy novel,” he recalled. That collaboration, The Coyote Connection, was the first novel he sold. He started his first Sheriff Dan Rhodes novel, with an eye to making it a short story. “It got to be over 50 pages, and I thought, ‘That’s not short!’” Crider recalled.

Editor Ruth Cavin from Walker Books came to an MWA meeting in Houston, asked to see it, and published Too Late to Die in 1986. It won an Anthony Award for Best First Novel.

A string of successes—many of them collaborations—followed. Between those written in his name, a pen name, and house names he really has no firm numbers. More than 100, probably. That kind of literary longevity simply comes from doing what works and long repetition, Crider said. His advice for would-be writers?

Still mourning his wife Judy after her death from cancer in 2014, Crider found himself writing another chapter, in the form of an unexpected find in a drainage ditch across from his house. Returning to his Alvin, Texas home after a jog in 2016, he saw a tiny kitten wrapped in a dirty old towel. He picked the gray-striped tabby up and brought her in. “What else could I do? Besides, everybody needs a cat. We were quite happy together,” he said.

And then, a plot twist.

“The next day I looked out the window and there were two more cats,” he remembered.

“I hoped they were squirrels, is what I hoped.” Chagrined but not daunted, Crider was worried about what would happen if he didn’t take them all in. So from three superfluous kittens, a new family sprang up with Bill Crider as the pater familias. He dubbed them Keanu, Gilligan, and Li’l Ginger Tom.

Frustrating as only kittens can be, the tiny trio were hard to wrangle. “They were all over everything and into everything, running around and tearing things up,” Crider remembered. Collectively, they were the Very Bad Kitties, or VBKs, for short.

The biggest surprise, however, was how the furry trio dominated Crider’s Facebook page. They soon eclipsed his other posts from Today’s Vintage Ad, PaperBack, and Bill Crider's Pop Culture Magazine.

“I put up pictures of things and I’d get six or seven likes, or maybe 20 likes. I put up the first picture of the VBKs, and had something like 1,500 likes the first day,” he recalled.

People adored the three photogenic, naughty-but-nice orphans. Draped over his knees. Synchronized lounging on cat platforms. Poised in boxes. Napping on window sills. (Napping everywhere.) Posters would make up captions, and guess at what the kitties were “saying” as Crider snapped their candid shots.

“You can certainly follow the growth of those cats—I should have given them their own Facebook page,” he said. Around the one year mark, the mature cats grew up and settled down. Although they didn’t fit conveniently in his lap any more, the photo ops continued. Crider said he’s had a few folks say the VBKs inspired them to adopt a cat. The more of that the better, he said.

“I’m a cat fan, and if a cat’s an orphan and he needs adopted, I say go ahead. I grew up with dogs, and I would recommend that, too. It doesn’t matter if it’s a cat or dog or a wombat—pets are just wonderful companions,” he said.

With her father’s illness, daughter Angela Crider Neary has undertaken securing a future for the VBKs. She credits the three felines for helping her dad find new meaning after her mother died in 2014. “I think he probably never would have gotten over that. They’ve helped him and kept him company. I think it was a good thing. A lot of people say my mom sent them to him. She would have loved them, herself,” she said. “He’s very lucky to have had them, and they’re very lucky to have had him.”

The apple hasn’t fallen far from the literary tree. Neary said her father’s pride in her writing was never more visible than when the attorney and author sold a story to Ellery Queen Mystery Magazine, which numbers her father among its distinguished contributors.

There’s been an outpouring of appreciation for Crider since word of his grim prognosis spread, Neary said.  “Everybody hates to lose him, especially me. It’s nice to see how much respect and admiration there is for him out there,” she said.

Among Crider’s many long-time industry friends, novelist and screenwriter Lee Goldberg said Crider is one of the most knowledgeable writers he knows.

“He informs his opinions with so much knowledge and actual experience, he’s really unique. The man has written western novels, crime novels, horror—that’s not easy. For all I know, he’s written science fiction and romance.”

The two worked together on several projects. He loved Crider’s Outrage at Blanco and Texas Vigilante, and a Lee Goldberg screen adaptation came close to full funding before an investor fell out. He’d still like to see it made into a film. When Goldberg launched Brash Books, Crider was one of his first calls for recommendations

“Eighty percent of our titles are re-releases of great novels fallen out of print. Who better to advise me than Bill Crider?

“He has schooled me in mystery fiction and Western fiction for quite some time.”

On the way to Bouchercon in New Orleans in 2016, Goldberg decided to drop in and see his old friend at his home near Houston. “It’s more of a balance between a home and a book depository,” Goldberg said. “You feel his love of books right away.”

And then there’s Crider’s universal likability.

“I would call it a ‘mission impossible’ to find anyone to say a harsh word about Bill Crider. Even somebody who disagrees with him will begin by saying they love and admire him,” Goldberg said.

The courage with which Bill Crider supported his wife through her battle with cancer—and with which he faces his own approaching death—exemplifies grace under the severest of all pressures, his long-time friend said.

“He is giving us a great lesson,” Goldberg said.

“It saddens me to think of all the great books by many writers that I'll never read. But I've had a great life, and my readers have been a big part of it. Much love to you all,” he blogged.

Asked for parting wisdom, he shared life advice he seems to have lived by.

Jacqueline Carmichael is an American-Canadian writer based on Vancouver Island in British Columbia.