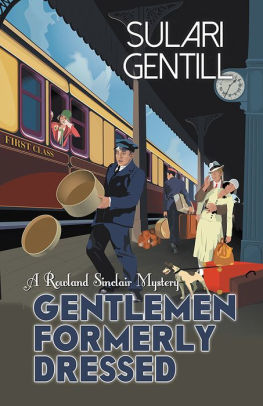 Gentlemen Formerly Dressed is the fifth installment in the award-winning Rowland Sinclair mystery series. It’s 1933, and Sinclair, a handsome, wealthy Australian artist, and his eccentric, bohemian friends Clyde (also a painter), Milton (a poet prone to quoting others without attribution), and Edna (a beautiful, pragmatic, and independent sculptress) have just escaped Germany, where Rowly was beaten and tortured for creating “degenerate” art.

Determined to warn those in power about the threatening developments and the dangers of appeasing the Nazis, the friends travel to England, hoping to influence the international diplomats gathered for the London Economic Conference. Just before it begins, Rowly stumbles upon the murdered Viscount Pierrepont impaled with a ceremonial sword and dressed in a woman’s nightie and makeup in his quarters at an exclusive men’s club. Pierrepont’s naive niece—and private secretary—Allie, is soon arrested for the crime, but Rowly and the others are certain she must be innocent.

Ranging from posh hotels, private clubs, and country estates, to back alleys and seedy taverns, to the Geological Museum and Madame Tussaud’s, and peopled with a wide array of colorful characters, Gentlemen Formerly Dressed is a lighthearted romp through 1930s high and low British society.

Rowly and his friends find themselves in one sticky situation after another, attending a wild, cross-dressing party, visiting eccentric acquaintances from Rowly’s university days at their country house, battling the fascist followers of Oswald Mosley, and getting unexpected help from Rowland’s conservative older brother Wil, as they attempt to find out who had the motive and opportunity to murder old Pierrepont. Real-life figures, including H.G. Wells and Winston Churchill, make cameo appearances in this entertaining tale.