Books
Death Waits in the Dark 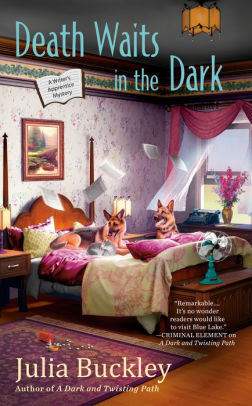 Julia Buckley’s Death Waits in the Dark is the fourth in her Writer’s Apprentice series, which has an offbeat, but appealing premise. Lena London is the apprentice to well-known Camilla Graham, whose work sounds like a combination of Mary Stewart and Phyllis A. Whitney, with a long list of titles to match. The two women seem to share a sort of mind meld as they work together plotting Camilla’s novels, both of them living in Camilla’s lovely Victorian house in Blue Lake, Indiana.

I love a good epigraph, and each chapter has one in the form of excerpts from the letters Camilla and her husband James wrote one another before their marriage. Their words hold a clue to the central mystery, a mystery embedded in James’ past. The narrative kicks off with an angry visit from a reclusive townie who accuses Camilla’s family of withholding information that cost her family dearly. Before she can clarify, she’s found dead, and the coming together of James’ childhood friends at the woman’s funeral brings the mystery to a boil.

The book is told from Lena’s perspective, and when she breaks her arm in a car accident involving Camilla, her perspective clouds. Her pain meds make her paranoid—or is someone out to get her? Are the things she sees real or just a terrifying mirage? To me Lena’s shifting perceptions are what makes the book memorable, as the reader tries to sort out what’s really happening.

The Blue Lake community as a whole is also illuminated as the older denizens confront their younger selves as they try and figure out the deadly secret by sifting through old letters and photographs. Again perspective is the key, as Lena must see them not as they are, but as they were, in order to understand why the past is bearing such deadly dividends in the present.

Death Waits in the Dark is an engaging and enjoyable read, and, despite a small suspect pool, provides a solution that is both fair and surprising.