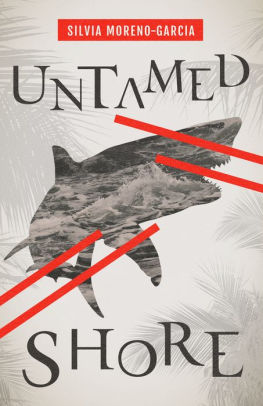 Silvia Moreno-Garcia’s Untamed Shore is an engrossing book set in 1979, in a seaside Baja California town known for its shark fishing. Seventeen-year-old Viridiana is a fan of the old film noirs she watches on her mother’s ancient TV set, and she fantasizes about the glamorous lives of Elizabeth Taylor and Montgomery Cliff. But her real life is dull until three Americans arrive in town and hire her to be their interpreter (she speaks four languages, going on five). The wealthy Ambrose is short-tempered, his new and much-younger wife Daisy is manipulative, and Daisy’s brother Gregory is movie-star handsome. The innocent Viridiana immediately falls for Gregory. But Viridiana’s saving grace is that she is as intelligent as she is innocent. When Ambrose dies falling down the stairs, Viridiana suspects it might not have been an accident. She soon finds herself drawn into a plot that mirrors the noirs she so loves. The town’s police are crooked, and Viridiana’s bitter mother is too wrapped up in her own misery to notice what her daughter is going through. Viridiana’s fantasies about getting out of the ugly little town increase. “Men could leave. Her father had left. But a woman couldn’t leave. Especially if she had a kid. A woman was chained.” Untamed Shore takes us through Viridiana’s loss of innocence, then into her heightened sense of awareness, and finally into a plan for a better life. The only problem is, to get away she might have to leave town arm in arm with a murderer. Viridiana’s love of noirs provides the backdrop for her predicament. “She hadn’t known what movie she was in, hadn’t known the ending, or the sort of music that would play over the credits.” By the ending of Untamed Shore, a 17-year-old girl makes a decision that is astounding in both its maturity and its cynicism.