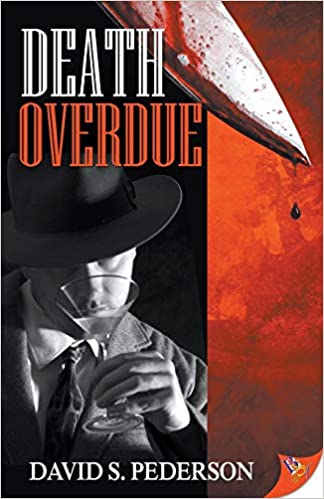 Set in 1947, David S. Pederson’s fifth Heath Barrington novel, Death Overdue, begins with the Milwaukee police detective receiving a threatening letter from the precinct’s janitor—his cousin Liz’s abusive and apparently vindictive ex-husband, Lawrence Crow—claiming to “know about” Heath and his boyfriend, beat cop Alan Keyes. When Heath shows up at Larry’s apartment to discuss the situation, Larry reveals that, while emptying the trash, he discovered a love note addressed to Alan from Heath. Unless Heath gives Larry $500 by noon tomorrow, Larry will out the men, placing both at risk of unemployment—if not also institutionalization and lobotomization. Distraught, Heath heads to a nearby bar, where he drinks himself into oblivion. The next morning, he wakes to news of Larry’s murder and panics: not only does he have no memory of the previous evening, but his shirt is stained with someone else’s blood. Worse, when he arrives at work, the chief demands to know why Heath’s name appears in a ledger found at the crime scene. Heath deflects, but knows that if his coworkers find Larry’s stash of blackmail material before Heath can figure out what happened, it won’t matter whether he actually killed Larry or not. Deftly drawn characters, brisk pacing, and an easy charm distinguish Pederson’s winning follow-up to 2019’s Death Takes a Bow. Pederson successfully evokes and shrewdly capitalizes upon the time in which his mystery takes place, using the era’s prejudices and politics to heighten the story’s stakes and more thoroughly invest readers in its outcome. Plausible suspects, persuasive red herrings, and cleverly placed clues keep the pages frantically flipping until the book’s gratifying close.