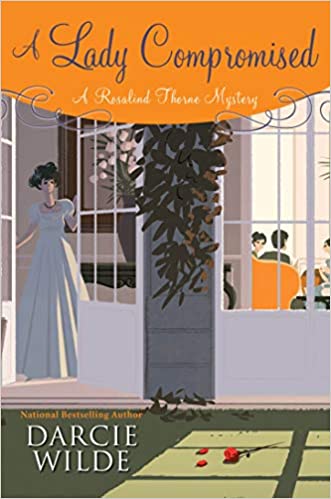 As it happens, Helen is a neighbor of Rosalind’s handsome old flame Devon, now Duke of Casselmaine. Rosalind is about to make an extended visit to Cassel House to help with the wedding of Devon’s cousin Louisa—and to find out whether there’s any chance of rekindling her past romance with the duke.

It’s clear right away that Rosalind and Devon’s attraction is as strong as ever, but Rosalind’s determination to learn whether William Corbyn died by suicide or murder threatens to derail their relationship before it can properly begin. Devon is leading an ambitious, expensive, and contentious project to drain the fens and improve the farmland in the area, and Rosalind must reluctantly consider his possible involvement in William’s death, a suspicion not helped by the fact that Devon seems intent on discouraging her from pursuing her inquiries.

A Lady Compromised portrays the outwardly straight-laced mores and complicated social connections of the country gentry vividly through a varied cast of characters, including social climbers, scheming poor relations, plucky young women, Bow Street Runners, and stalwart servants. Rosalind is intelligent, empathetic, and likable, as well as an astute judge of character who can elicit important information from seemingly superficial chitchat.

Wilde’s descriptions of people, places, and events create an immersive experience for the reader. Although it takes some time to set the stage, the plot’s fast and furious twists and turns sustain the suspense until the final pages, and the brief epilogue hints at more adventures to come in Rosalind’s personal journey.