Books
A Line to Kill 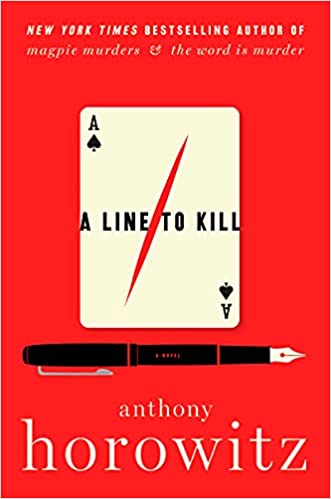 When author Anthony Horowitz and Daniel Hawthorne, the enigmatic detective he profiles in a true-crime series, are invited to a small literary festival on Alderney, a tiny Channel Island, it seems like an easy venue for Hawthorne’s first foray into book publicity. The half-dozen other writers are strikingly different from one another: a French poet with a punk look; a TV celebrity chef promoting his new cookbook; a gentle, bestselling children’s author; an eccentric, blind psychic; and a local historian. The Alderney islanders, formerly a tight-knit group, are deeply divided by a bitter dispute over whether to allow a proposed high-voltage power line to be routed through the middle of its picturesque scenery to connect Britain with France.

Horowitz quickly picks up hints that not everything (or everyone) is as it seems, and finds Hawthorne simultaneously irritating and intriguing. Then a murder shocks the community, which is normally so quiet that Alderney doesn’t even have its own police force. The police officials ferried in from the nearest larger island immediately lock down all transportation and ask the more experienced Hawthorne and Horowitz to help out with their investigation. No one can leave the island—including the killer.

The narrative opens with a lovely little tribute to the publishing industry, and proceeds to affectionately skewer that industry with just the right amount of snark. The writing is terrific, studded with spot-on observations and evocative descriptions. Making himself a character in his own story, as the bumbling sidekick to an inscrutable but brilliant detective, allows Horowitz to both make use of and have fun with well-known genre tropes.

The characters are well-drawn, often in just a few lines of dialog, and their interactions feel authentic. Horowitz perfectly captures human nature, writing about his own character self-deprecatingly and about others with empathy and humor. The intricate plot moves along briskly, providing one intriguing puzzle after another as it builds to its unexpected finale.