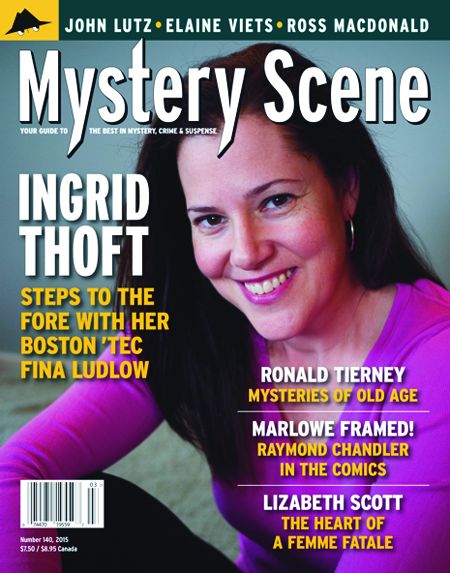 Ingrid Thoft has been on our radar ever since the first Fina Ludlow novel, Loyalty, in 2013. Kevin Burton Smith singled her out in "Triple Threat: Exciting New Voices in the Private Eye Novel" in MS #131. (The other two writers were Sara Gran and Lisa Brackmann.)

Thoft’s moody, tenacious Boston PI has also piqued the interest of TV, with a Fina Ludlow series now in development at ABC. In this issue, we asked author and journalist Hank Phillippi Ryan, herself an expert on all things Bostonian, to chat with this interesting new talent.

Continuing his indefatigable quest to champion detective fiction, Kevin Burton Smith would like to draw your attention to Ronald Tierney, creator of Deets Shanahan, a cranky, blue-collar Indianapolis PI of a certain age. Tierney is bringing his rock-solid series to a close with A Killing Frost and we pay tribute to his achievement in this issue.

In addition to books and film, Raymond Chandler’s Phillip Marlowe has also had a notable career in the comics. It’s fascinating to see the various takes that artists have on this iconic character. As Dick Lochte notes in his interesting article, Marlowe seems to speak to everyone, although in decidedly different ways. And a big thanks to Dick for the use of his personal library for illustrations.

Did you know that Ross Macdonald and Eudora Welty were pen pals? Actually, they were more than that. In his intriguing article, Jon L. Breen states that these two gifted writers conducted a platonic love affair through their intimate, wide-ranging correspondence. Jake Hinkson considers the complex appeal of actress Lizabeth Scott, noir star of the ’40s and ’50s, who died earlier this year. Included is a list of her best films in case you want to check them out.

Also in this issue, Ed Gorman chats with John Lutz, a genre stalwart for many years, who moves from private eye novels to thrillers to short stories with deceptive ease. We wish you a long, lazy summer full of great reading. See you in the fall!

We'd love to hear about books you would recommend, new or old - write and let us know!