Books
A Spark of Death 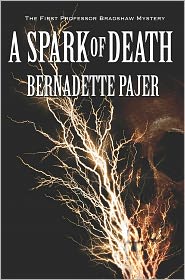 In an autobiographical footnote to this debut mystery, Bernadette Pajer confides that she loves to do research, be it for a few minutes, hours, or days. Her passion shines through in this nuanced introduction to widowed Benjamin Bradshaw, an introspective but inspired professor at the University of Washington.

Set in 1901, the inspiration for this tale is the new invention of electricity, its various adaptations, its detractors and admirers. Think electricity can’t be fascinating? Pajer will change your mind.

With President William McKinley due to visit the university, and in particular its electrical laboratory where excited students plan to exhibit their projects, the campus proves a hotbed of intrigue that leads to three murders and an attempt on Bradshaw’s life at Snoqualmie Falls which powers Seattle’s electrical power. Moreover, he is the initial suspect in the strange electrocution of his nemesis, the overbearing department chairman who dies in a cage that houses the Electric Machine’s Tesla Coil. While the chairman was a devotee of Tesla, one of the pioneers of electricity, Bradshaw favors the inventions of Thomas Edison, which led to heated disputes between the two.

This enjoyable mystery touches on quirky students, politics, anarchists, feminism, police detection, and even the search for elusive Alaskan gold. When Bradshaw’s own life is at stake, he fears for the future of his eight-year-old son and finds a soupcon of romance as well. Pajer offers full-fleshed characters and spares no effort in detailing turn-of-the-century life and the new-fangled electricity that forever changes it. She skillfully weaves her subplots into the story, making seamless transitions among them. Hopefully, this is the just the first of many adventures for the indefatigable Bradshaw and his equally delightful cronies.

A debut mystery that touches on detection and electrical invention at the turn of the century.