"If you've ever read a mystery story you know that a detective never works so hard as when he's on a vacation. He's like a postman who goes for a long walk on his day off." 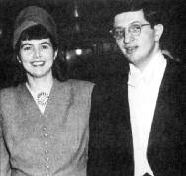 Composer Bernard Herrmann excelled at creating film, radio and television scores. He is shown here with his wife Lucile Fletcher, whom he encouraged to write for radio. She authored two of the most famous shows in radio history, “The Hitchhiker” and “Sorry, Wrong Number,” both of which appeared on Suspense.

My parents had little interest in either movies or music but they bought their first TV set around 1952, and that 12-inch screen exposed me to both those worlds when I was nine. My first experience of great music was in the form of the scores for cliffhanger serials like Flash Gordon and TV series like Captain Video and The Lone Ranger. Little did I know that I was listening to Liszt, Wagner, and Tchaikovsky!

My first experience of great music written specifically for the small screen came when I was around 14 and spent many a Friday and Saturday evening watching CBS series like Perry Mason, Have Gun Will Travel, Rawhide, and The Twilight Zone. I had no idea that I was listening to Bernard Herrmann, who wasn’t even listed in the credit crawls of those superb series. More precisely, he was credited as composer of the score for Have Gun’s debut episode, but with his name misspelled. Even had I seen his name several times a weekend as by rights I should have, it would have meant nothing to me. Discovering him by name didn’t come until several years later when I had become entranced by classic Alfred Hitchcock films like Vertigo and Psycho—not only the films but the haunting scores, which of course Herrmann had composed. By the time I finished my education I should have had enough musical savvy to recognize the unique Herrmann sound whenever I heard it, but I was well into adulthood before I learned that much of the TV music of my formative years came from the man who had scored Hitchcock’s greatest hits.

All this is by way of introduction to Bernard Herrmann: The CBS Years, a 2-CD set released late in 2003 by the Belgium-based Prometheus label and already a scarce item. I had to turn handstands to get my copy, but the hassle was well worth it. Listen to those themes which no one else could have written and you’ll understand part of the reason why the first seasons of Rawhide and Have Gun and Twilight Zone remain so green in the memories of my generation.

You’ll also understand why the early Perry Mason segments, when offered on video by Columbia House a few years ago, were touted as having been shot in the film noir style—a ridiculous claim, but one that almost makes sense if you know that the Mason background themes came from the same pen that had scored Vertigo and Psycho, and earlier noirs like On Dangerous Ground, and that spiritual grandfather of so much film noir, Citizen Kane. No one does ominous like Herrmann does ominous.

“The Case of the Sulky Girl” (October 19, 1957) offers a lovely example of his contributions. Cross-examining a crucial witness against his innocent client, Mason approaches, hands him a set of flash cards and asks him to read from them. A Herrmann chord is played.

“The quick brown fox jumps over the lazy dog.”

Mason takes a few steps back.

Herrmann chord. “A bird in the hand is worth two in the bush.”

Mason steps even further back.

Herrmann chord. “In a democracy all men are created equal.”

Mason, shouting: “What was that? I can’t hear you, Mr. Graves!” He repeats the line.

Herrmann chord. Graves turns to the next card. “As the twig is bent, so grows the tree.”

Mason, now at the courtroom door: “The next card!”

The witness starts to read, then stops. Herrmann’s music floods the soundtrack from this point on. “Go on, Mr. Graves!” Mason shouts.

“Crinston, I want Graves to go with you.”

“CRINSTON, I WANT GRAVES TO GO WITH YOU!”

That is all Mason needs to break down the witness and expose the plot to frame his client. Thanks in part to Herrmann, but also of course to director Christian Nyby and scriptwriter Harold Swanton, it’s the most dramatic climax in any episode of the series, and nothing at all like the denouement in Erle Stanley Gardner’s 1933 novel of the same name.

Soon after finding the CBS Years set, I typed Herrmann’s name into ever-faithful Google and was rewarded with two discoveries: a Bernard Herrmann Society with its own website, and Steven C. Smith’s excellent biography A Heart at Fire’s Center: The Life and Music of Bernard Herrmann, which taught me much about the composer. Let me quote a few passages and then, in the best Ellery Queen manner, challenge you to spot the connection I made.

“Explosive, insecure, paranoiac, Herrmann was, as many observed, his own worst enemy.”

“Herrmann’s life was an ongoing battle with demons. [He had] a lifelong fascination with—and fear of—death, a subject Herrmann...studied obsessively in his art.”

“[His] vision of life...recognized both the beauty and horror in the human condition....[He] excelled in capturing the psychological bond between love and anxiety.”

“[He was] a lost child who wanted affection desperately... [E]verything about him said, ‘Love me, please.’ Yet his behavior drove people away, the very people he wanted to love him.”

“[His] favorite dramatic themes [were] romantic obsession, isolation, and the ultimate release of death.”

Sound familiar? These passages, and countless more in Smith’s biography, describe another man precisely as well as they describe Herrmann. A man whom I’ve called the Hitchcock of the written word and the director’s spiritual brother. A man who, like Herrmann, was born and raised in New York City, had Jewish roots that were meaningless to him and who, like Herrmann, died at age 64. I refer, as if you hadn’t guessed by now, to Cornell Woolrich. We don’t ordinarily think of an author as having any special affinity with a composer, and no one would dream of trying to identify most crime-suspense novelists with particular composers. But if you’ve read enough Woolrich and heard enough Herrmann, I bet you will also hear the click in your head just as I did. Woolrich-Hitchcock, Hitchcock-Herrmann, Herrmann-Woolrich. Like Jules and Jim and Catherine in Truffaut’s film: “round and round, together bound.”

Francis M. Nevins is a professor of law at St. Louis University and the author of six mystery novels, forty-odd short stories and a mountain of nonfiction on the genre, including two Edgar Award-winning books.

"Extravagance is a two-dollar cigar. Waste is to light it with a dollar bill."

—The Man Who Broke the Bank at Monte Carlo, 1983, by Michael Butterworth