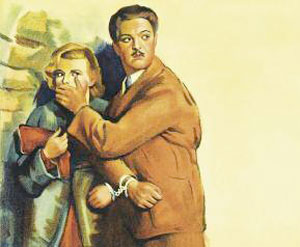 Man on the Run

Image from the movie poster for Alred Hitchcock's classic 1935 film The 39 Steps, based on Buchan's novel

While all authors strive to create memorable characters and lasting books, occasionally those characters and books become so prominent that the identity of the author has to take a backseat. Most people, for instance, have heard of Bulldog Drummond, though these days, far fewer will be able to name his creator, “Sapper.” It is likely that even fewer could cite Sapper’s real identity, H.C. McNeile. A prime example of this phenomenon is John Buchan (1875-1940), a Scottish journalist, historian, politician, and popular novelist, whose name may or may not ring a bell in 2012, though his signature work, The Thirty-Nine Steps can lay a claim as the progenitor of the modern spy novel.

The first book to feature adventurer-turned-agent Richard Hannay, The Thirty-Nine Steps was a success from its very first appearance in serialized form in 1915, in Blackwood’s Magazine. It has been adapted to every medium, with varying degrees of fidelity to the original, including the stage. Yet it is just one of many, many books by the prolific author.

The son of a churchman who delighted in filling his son’s head with Scottish legends and lore, John Buchan attended university through scholarships, and even before graduation had achieved publication. His first work, Essays and Apothegms of Francis, Lord Bacon was published in 1894. Two years later his novel Sir Quixote of the Moors came out. He began a career in law, and in 1902 became personal secretary to Lord Alfred Milner, the colonial overseer of South Africa. Buchan’s experiences in Africa would inform much of his subsequent fiction, though none so much as his 1910 adventure novel Prester John, which involves a Zulu uprising that is connected—at least fictionally—to the medieval legend of a Christian ruler of Ethiopia and other far-off locales. The novel was a popular success and was translated into many languages. 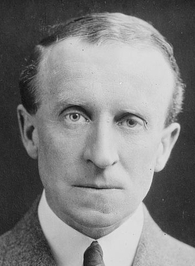 Between 1910 and 1914, Buchan published another novel and five nonfiction works, in addition to raising a family and getting his feet wet in British politics as a confirmed Tory. But it was a prolonged illness in 1914 that led to his most famous work, which he wrote while bedridden.

At the start of The Thirty-Nine Steps Richard Hannay, an independently well-off Scot in his late thirties, has just returned to London from South Africa, only to find himself bored. He tumbles into intrigue by way of a neighbor named Scudder, who has information about an international conspiracy that is plotting the assassination of a Greek official, the first step of a world-domination scheme. When Scudder is stabbed to death inside Hannay’s flat, Hannay realizes that he must flee, not only to avoid being implicated in the killing, but so he can follow the clues Scudder has left behind in a notebook and try to thwart the conspiracy. “I hate to see a good man downed,” he states, “and that long knife would not be the end of Scudder if I play the game in his place.”

Hannay proves to be “deucedly” clever while playing the game, though he repeatedly protests otherwise. “All this was very loose guessing and I don’t pretend it was ingenious or scientific,” he tells the reader, after sussing out an otherwise incomprehensible deduction. “I wasn’t any kind of Sherlock Holmes. But I have always fancied I had a kind of instinct about questions like this.” Elsewhere he describes himself as “an ordinary sort of man, not braver than other people.” Yet even after joining forces with official members of British military intelligence, Hannay remains the smartest and most daring person in the room. The Thirty-Nine Steps ends with the capture of a group of German spies, but the overall plot unthwarted and World War I begun.

Hannay returned in the novels Greenmantle (1916), Mr. Standfast (1919), The Three Hostages (1924), and The Island of Sheep (1936), through which he evolved into a genuine secret agent and aged correspondingly. He also made cameo appearances in The Courts of the Morning (1929) and Sick Heart River (1941), released in the US as Mountain Meadow. Hannay was not, however, Buchan’s only recurring character. Scottish barrister and outdoorsman Edward Leithen appeared in the books The Power-House (1916), a thriller; John Macnab (1925), which was more of a caper; The Dancing Floor (1926), a somewhat mystical adventure; The Gap in the Curtain (1932), a quasi-science fiction novel; and Sick Heart River, a spiritual valedictory that was published posthumously. Leithen, who in addition to his other avocations, is a conservative politician, was a fictionalized version of Buchan himself. 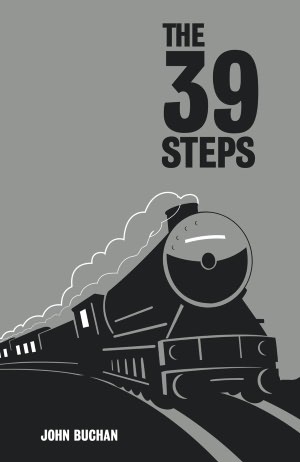 Photos of the author reveal a pinched, dour visage that makes Calvin Coolidge look like a burlesque comic, belying the vibrant and unyielding imagination beneath. In his lifetime, Buchan published some 30 novels, seven short-story collections, and about 50 nonfiction books, including biographies of Sir Walter Scott and Oliver Cromwell. He continued to turn out prose even after being created Baron Tweedsmuir by King George V in 1935 and named governor general of Canada, which he remained until his death in 1940.

When read today, Buchan’s writing style and “I-say-old-chappie” characters seem quaint, albeit charmingly so. Less charming is his tendency to wear his British imperialism on his sleeve, meaning that his books are blithely filled with the sort of racial, religious, and social stereotypes that marked the era. Even so, Buchan’s influence has been enormous. The Thirty-Nine Steps contains what might be the first recorded use of the term “mean streets,” usually associated with Raymond Chandler’s Los Angeles, but here used to describe the sinister passageways of London. Similarly, the now-iconic scene from Alfred Hitchcock’s 1959 North by Northwest in which Cary Grant is chased by a crop duster is presaged in The Thirty-Nine Steps.

In short, had Buchan not road-mapped the path for the man on the run against the conspiracy, there may not have been Eric Ambler, Graham Greene, Alfred Hitchcock, or even Agatha Christie in her “master criminal” mode (The Secret Adversary), at least not as we know them today.

Crikey, what a deucedly cracking accomplishment!