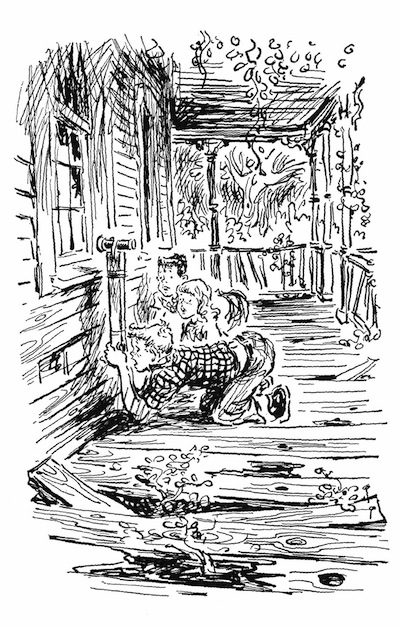 “What my mind can conceive, I can achieve."
—Alvin Fernald’s motto

Many kids have literary pals, favorite characters they emulate and revisit. Nancy Drew turned some readers into crafty manipulators while Jim Hawkins compelled others to dig up their backyards in search of treasure. These books, and others like them, succeed because young readers connect so strongly with the characters. Alvin Fernald, detective and inventor, is one of these characters. “What my mind can conceive, I can achieve,” he declares in The Wacky World of Alvin Fernald. Kids who read his adventures took it as their motto. I know I did.

The creation of writer and editor Clifford B. Hicks, Alvin Fernald starred in a series of nine books between 1960 and 1986, and last year Hicks wrote the tenth installment, Alvin Fernald’s Incredible Buried Treasure. The now 90-year-old Hicks, a veteran of WWII and the Marine Corps, built a career as a writer and an editor at Popular Mechanics before his retirement some years ago. He said he wrote the new book to combat boredom and the sedentary life forced on him by two strokes and a heart attack.

Throughout the series, Alvin Fernald invents and sleuths his way along as a secret agent, cryptographer, TV anchorman, pollution fighter, and master of disguises. His sidekick, Wilfred (“Shoie”) Shoemaker, is an amiable jock and the best athlete at Roosevelt High. Fernald’s kid sister Daphne is dubbed “The Pest” and is a perpetual tagalong who sometimes comes in handy. In the first book of the series, The Marvelous Inventions of Alvin Fernald, Alvin, Shoie, and Daphne rescue an elderly woman who is being held captive by an evil nephew, and it’s Alvin’s detective ability and his creative inventions that make the happy ending possible. 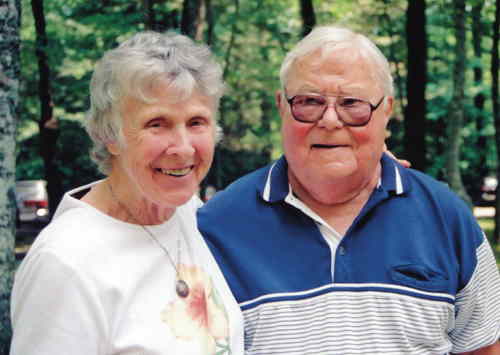 He begins by inventing his “Sure Shot Paper Slinger,” a contrivance to lighten the load of his morning paper route, made from a broom handle, an inner-tube rubber, two screen-door springs, and a tube made of cardboard. Then, in just over 100 pages, he invents an Electric Periscope, a Supersecret Eavesdropper, a One-Jerk Bed Maker, a Jet-Powered Message Carrier, and an Automatic Mantrap—all from what he finds around the house and in his workshop. The appeal to preteen tinkerers is obvious, and a little Alvin is evident in Hicks’ personality, as well.

Author Clifford B. Hicks (right), who passed away
in 2010, with wife, Rachel.

There have been many young-adult adventure series published from the turn of the century to now, but up to and through the early 1960s, the Stratemeyer Syndicate juggernaut, with its ever-updated incarnations of Tom Swift, the Hardy Boys, and Nancy Drew, ruled the earth. The adventures of the Swift series in particular was just what kids at the beginning of the space and technology age craved, except for one thing. When it came time for the reader to take something from the books and apply it in the real world, there was a large technology gap between Tom Swift’s laboratory and what was available in dad’s home workshop. There was no such problem with Alvin’s ingenious use of everyday materials. His self-proclaimed “magnificent brain” made him a sleuthing amalgam of Thomas Edison and MacGyver.

There was nothing flashy about Alvin. A regular kid in sneakers and jeans from Riverton, Indiana, he possessed a pluckiness and determination that was very attractive to preteen and young adolescent readers. While the Hardy Boys and Tom Swift competed in the adult world, in effect urging readers to grow up and join them, some young readers with healthy imaginations preferred to remain what they were—kids. They wanted to interact in the adult world but on their own terms. Alvin’s adventures satisfied these practical types by combining strong plots, reasonably realistic settings, and ingenious uses for easily obtainable old machine gears and other scraps gathering dust in a basement or garage. 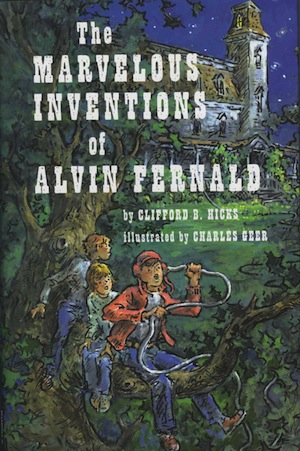 Encyclopedia Brown, another young detective who started his career a few years after Alvin, possessed stone-cold deductive skills that were second to none, but he also had the personality of a Univac vacuum-tube computer. There was little for a kid to emulate, especially when his detecting skill was a result of reading the entire set of Encyclopedia Britannica. Many kids, no matter how curious, weren’t going to spend time working their way through thousands of pages of an encyclopedia when there were things to invent.

Hicks attributes the staying power of his series to the fact that “kids today like the same things they did a generation ago.” Five of the books are in print, and the series is still in circulation in many libraries.

Lest any skeptic think that only the nostalgia of baby boomers keeps the series alive, the library tells a different story. Children’s Librarian Kelli Phelan of McKinney, Texas, says that in the competitive world of preteen and juvenile fiction, the Fernald series remains in demand. Any book that’s checked out two or three times a year is great, she says, and the Fernald books do better than that. “Any book that lets a kid use his imagination is going to be popular, as is any book that lets the kids be the hero, because it makes them feel empowered,” she says.

“I worked at Popular Mechanics when the Russians shot Sputnik into space and there was a great deal of worry about that,” says Hicks. “Then I wrote a book called First Boy on the Moon and the publisher was agreeable to any other approach. I was writing to make Popular Mechanics a resource for inventors and thought I could use that background to write a boy into adventures and back out again.”

I’m sure I wasn’t the only boy who repaired to a basement or attic laboratory after reading Alvin Fernald. In my parent’s attic, dusty and scattered with old electric motors, an Erector Set, magnets, test tubes, and my sister’s depleted Gilbert Chemistry Lab, I was determined to see what I could invent. I did take a tiny battery-powered electric motor and nail it to my brother’s skateboard; it propelled me down the driveway until the motor seized. Also under the influence of Alvin I constructed a spear gun using an enormous rubber band, an expandable curtain rod, and a length of dowel wood for the spear. My fifth grade teacher approved it as a prop in our school play, and it functioned so well that everybody in class tried to shoot somebody else with it until the teacher locked it up. Finally, when I realized that I liked the idea of inventing more than inventing itself, I quit, but I continued to enjoy the books. 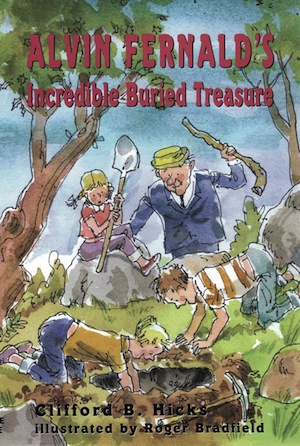 And now there is a new book. Alvin Fernald’s Incredible Buried Treasure involves both sleuthing and inventing, and author Hicks mostly leaves the Fernald characters and setting unchanged. One small concession to the passage of 23 years since the previous book is Daphne’s interest in yoga. Another such concession is larger and an integral part of the plot; but don’t sweat it, there are no computers or cell phones or anything digital here.

The mystery in Alvin Fernald’s Incredible Buried Treasure is a search for a cache of priceless cultural artifacts gathered by a runaway slave named Caleb well over a hundred years ago. Befriended by Lincoln and a resident in the White House for several years until the President’s assassination, Caleb grew close to the Lincoln family, and kept a diary of their relationship. Caleb eventually became a printer and settled in Riverton, Indiana. A dealer in antiquities comes upon the diary and asks Alvin to help him decode clues to the whereabouts of the priceless historical documents Caleb describes. And that’s as far as I’ll take you into the latest book.

Jill Morgan of Purple House Press, the publisher of the new book, says she’s also reissued The Marvelous Inventions of Alvin Fernald because she’s a longtime fan. According to Morgan, the factors that keep Alvin Fernald alive are a combination of things. “Most people say they want the books for themselves,” she says, “And if they have children they hope the books become special to them as well. I wanted to pass on my favorite stories to my kids.” Bethlehem Books has also reissued three titles, among them Alvin’s Secret Code, one of the most popular books in the series.

With the publication of Alvin Fernald’s Incredible Buried Treasure, a chance for new fans to meet Alvin, and for older ones to reacquaint themselves with him, has arrived. It’s time to get workshops organized, and to replenish the inventing bench with visits to the hardware store or by helping a neighbor clean out the garage. Ask a son or daughter to help—Alvin Fernald rides again, and the entire family can get involved.

Steven Nester is an educator, freelance writer, and radio host whose mystery author interview show, Poets of the Tabloid Murder, can be heard at Public Radio Exchange and on KRTS Marfa Public Radio. He lives in McKinney, Texas.