In 1948, Trixie Belden strode into the annals of children's mysteries, taking her place as one of the most distinctive and appealing girl sleuths ever created.

The Trixie Belden series was created by Julie Campbell Tatham (and published under her maiden name, Campbell), in response to Western Publishing's call for fast-moving, inexpensive children's books. Almost immediately, the series won legions of fans, including some of today's notable mystery writers.

"There is no doubt that my characters were influenced by the Trixie Belden series," says Agatha-winner Earlene Fowler. "Fans tell me that my detective, Benni Harper, makes them feel that they know what happened to Trixie when she grew up. I'm proud of that," Fowler continues. "It's good fiction and Julie Campbell had a good voice."

Denise Swanson (Murder of a Barbie and Ken) went so far as to give her detective, Skye Dennison, a best friend named Trixie. "I thought maybe one or two people would get my sly joke," Swanson laughs. "But a whole group of Trixie fans showed up at a book signing I did in Ohio!"

Trixie also shows up as the cherished childhood reading of a pivotal character in Keith Ablow's suspense novel, Denial. "My wife was an avid reader of Trixie Belden as a young girl," explains Ablow, who is also a forensic psychiatrist. He was intrigued and impressed by his wife's quest to collect a complete set of Trixie Belden books. "She doesn't have art work or dolls from her childhood: she has her Trixie Belden books. I thought that was a powerful, powerful fact. I imagine these books must hold a special place in a number of little girls lives."

It's easy to condescend to these books as "kiddie potboilers," which, in fact, they are. But that overlooks the real achievements that made the series so memorable. For Campbell salted the contrivances of the genre with witty dialogue, strong characters and a vivid evocation of locale.

Trixie lives at Crabapple Farm in the Hudson River valley, along with her parents and three brothers: 16 year-old Brian, 14 year-old Mart; and six-year old Bobby. Modeled on Campbell's own home just outside of Ossining, New York, Crabapple Farm sits a few miles outside of fictional "Sleepyside-on-Hudson," a name derived from combining "Sleepy Hollow" and "Sunnyside," the name of Washington Irving's home. 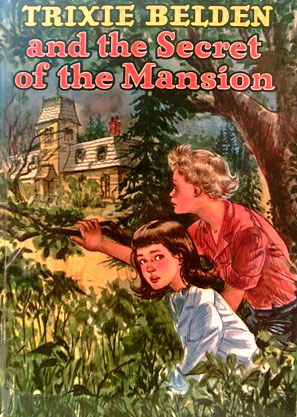 The first three books introduce most of the series' regular characters and set the pattern for the remainder of the series. The Secret of the Mansion and its companion volume, The Red Trailer Mystery, chronicle the adventures and blossoming friendships of Trixie and her new neighbor, the wealthy, but lonely and timid Honey Wheeler, and Jim Frayne, a hot-tempered, resourceful runaway. The trio find a fortune in the dilapidated "Miser's Mansion," rescue Jim from a venal and abusive stepfather, and outwit trailer thieves on their way to finding Jim a home as the Wheeler's newly adopted son.

When Trixie's older brothers come home from summer camp in the third volume, The Gatehouse Mystery, the teens form a club, the Bob-Whites of the Glen, vowing to help others and be like "one big family." In between swimming, horseback riding, baby-sitting, and other activities, Trixie and the Bob-Whites catch big city diamond thieves.

Later volumes added two more regulars, Diana Lynch, the school beauty, and Dan Mangan, the rebel who's been misunderstood, but with The Gatehouse Mystery the world of the series is formed. Trixie is firmly situated in a close-knit circle of family and friends. This sense of community exercises a strong appeal for many readers. "Trixie's is a world you want to be in," says Jennifer Dussling, currently the Trixie Belden editor at Random House. "Not everything is about moving the plot along: sometimes they're just hanging out and toasting marshmallows."

Fowler agrees and believes that the ensemble cast influenced her own creative choices. "My books are much more multicultural, but the family feeling is there, just like it is in the Trixie Belden books."

Further, the various characters are often distinctly drawn individuals. "These books taught me to pay attention to how characters speak," says Lora Roberts, author of Another Fine Mess. "Trixie and her friends are alive and are fomenting the action. They're doing things that develop naturally out of their characters and situations."

In the late 1940's, Trixie herself was something of a breakthrough character. "Trixie raised readers' expectations of what a girl character can be," says Octavia Spencer, co-author of the new Rock Holler Gang series which features a female leader. "She is not afraid to go after what she wants." 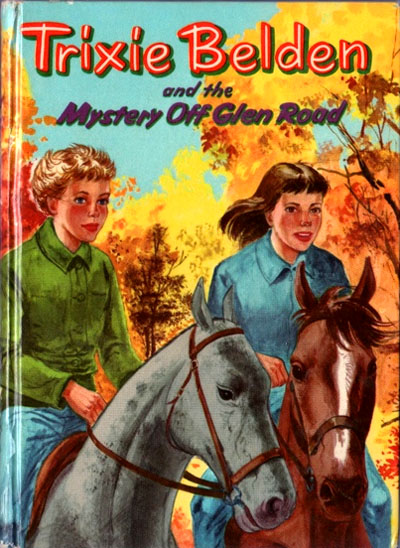 While she's a strong character, she's not perfect. Especially in the first six books, the action of the mystery often coincides with Trixie's personal development. This personal stake sets the series apart from many mysteries where the detective's derring-do and insight solves someone else's problems. Nancy Drew stories, for example, often have a sense of noblesse oblige, Nancy arriving in well-heeled, well-groomed poise to solve the problems of those not quite so quick-witted or fortunately situated as she. Trixie, in contrast, is younger and not quite put together : either in wardrobe or personality. Like most adolescents, she's a welter of possibilities. She loves and readily sacrifices to help her family and friends. But she also jumps to conclusions about people.

Early in The Secret of the Mansion she bluntly dismisses the crotchety neighbor, Mr. Frayne, as a "greedy old miser" and wonders how he could have panicked so completely when his wife was bitten by a copperhead.

A few chapters later, Trixie faces the identical challenge when kid brother, Bobby, is bitten by a copperhead while her parents are away. Trixie administers first aid and, with Honey's help, gets a doctor out to Crabapple Farm. During the emergency she demonstrates a courage and level-headedness that had eluded old Mr. Frayne. But she also comes to empathize with his plight: "every minute of the long wait Trixie lived in her imagination with Old Mr. Frayne and his wife on a lonely road in a car that wouldn't start. 'I guess I'd go crazy too if that happened to me,' she admitted"

It's a classic Trixie developmental moment: her strengths are confirmed and she begins to recognize and outgrow her weaknesses. "People are lovable and admirable when they're working to become what they can be," observes Swanson. "That's what we see in Trixie throughout the books. She's working to become a better person and she always acknowledges when she makes a mistake."

This psychological realism extends to other aspects of the books. While in some ways Crabapple Farm represents an idyllic slice of Americana, the books can throw some big challenges at Trixie and her friends. "People look at the books and say, 'how sweet,' but some issues, such as Jim Frayne's troubled home life, are the precursors for the young adult fiction of the 1970's," Fowler notes. "I don't think Campbell is given enough credit for being ahead of her time."

The Mystery Off Glen Road is a case in point. As the book opens Trixie and Honey are happily contemplating the "perfectly perfect" clubhouse they've been restoring over the course of the previous two books. But they wake up the next morning to find their clubhouse and hard work nearly destroyed by a blizzard. The remainder of the book follows the teens as they put Humpty Dumpty back together again. 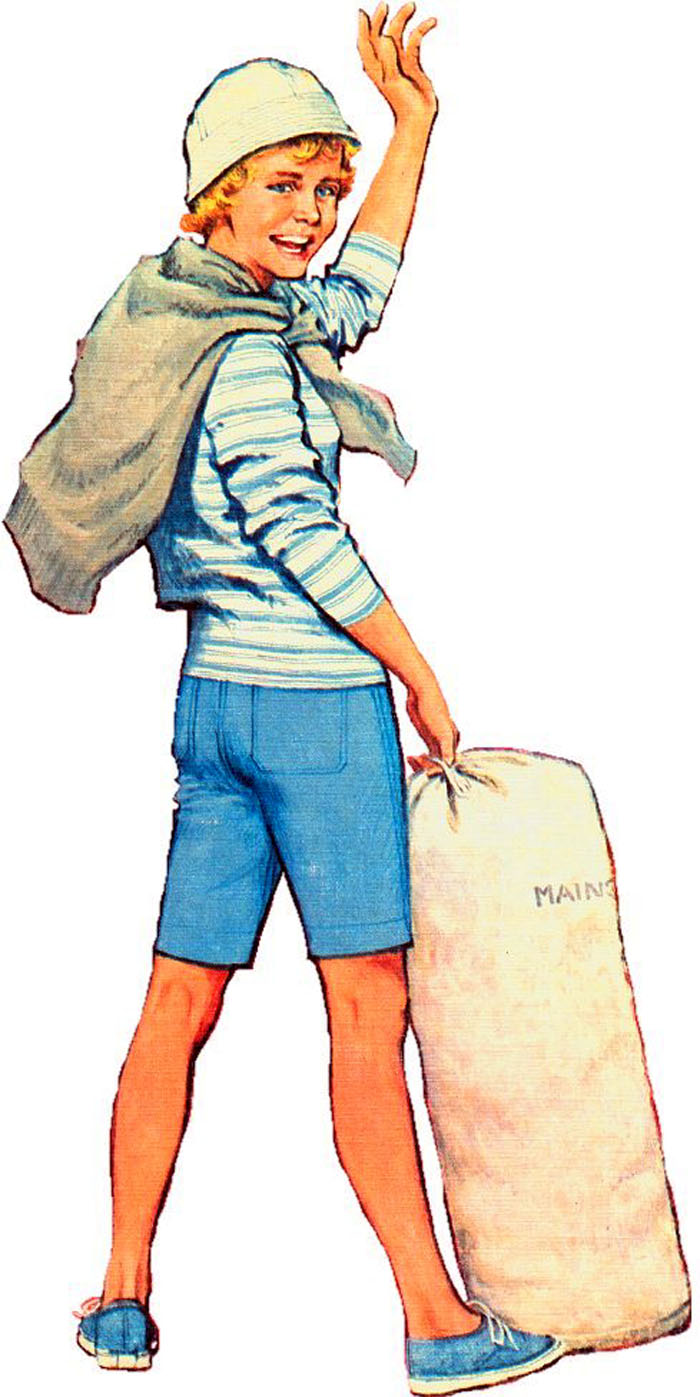 "That's a lesson in life and it's quite a foreshadowing of adulthood," says Swanson who also holds down a day job as a school psychologist. "I see many kids nowadays who aren't as equipped to handle those disappointments. Parents step in and rescue them more than I think is good. This was a turning point for these characters."

For the adult reader, the mysteries themselves sometimes aren't especially well-crafted or convincing. Even so, Roberts believes that the books taught her some valuable storytelling lessons. "Campbell didn't just bring clues in and drop them. Her clues have an actual place in the narrative. For example, Jim's christening mug puts his evil stepfather on his trail in The Secret of the Mansion as well as the trailer thieves in The Red Trailer Mystery. The same mug leads Trixie to him. I doubt that Campbell initially planned for the christening mug to keep turning up: but once she got the clue she carried it forward."

Campbell exploits the specifics of landscape and locale, e.g., copperheads and catamounts, in developing Sleepyside. Later series authors also built on the area's heritage, such as Washington Irving's "Legend of Sleepy Hollow." "The town seemed so real, I was shocked to find there was no Sleepyside in our atlas," recalls children's author Kathryn Reiss.

Years later, the tables were turned when Reiss created the fictional town of Garnet, Massachusetts, for two of her books. She was pleased and amused to receive a letter from a young reader who had tried to locate Garnet while on family vacation. "Shades of Sleepyside!" she says.

A total of 39 Trixie Belden volumes were published between 1948 and 1986. Campbell, however, left the series after the first six books. Subsequent volumes, published under the house name, "Kathryn Kenny," were written by authors of varying abilities and allegiance to Campbell's original vision. But the pattern of a spirited girl and her friends working together and solving mysteries survived.

So did fan loyalty, sending prices soaring at online auction sites. The four volumes Random House reissued in 2003 have already been through multiple printings and the publisher has announced plans for reissuing at least the first 15 volumes.

The small-town, harum-scarum girl with PI ambitions turns out to have staying power. "These were by no means meant to be classic kids books," says Swanson. "They were meant to be pulp fiction for kids. But Trixie tunnels her way into your heart and so many of us still love her."

Trixie Belden, it seems, is here to stay and delight a new generation of young readers and, just possibly, influence another generation of mystery writers.

Judith Sears is a freelance writer based in Washington, D.C. Visit her online at sleepysidezone.com.