Nonfiction
Haunted Heart: the Life and Times of Stephen King 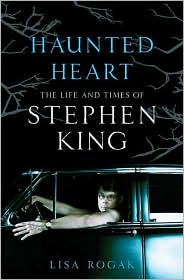 This Edgar-nominee is highly readable, efficiently organized, and most welcome as the first book-length King biography. Besides being a formidable writer paradoxically underrated as a result of his success and productivity (plus his identification with the horror genre), King emerges as an admirable human being: philanthropist, family man, and generous supporter and advocate of fellow writers. That said, wife Tabitha King, herself an accomplished novelist, comes across as a saint, possessing extraordinary patience and wisdom to deal with his quirks and excesses.

Among the interesting details are the jaw-dropping extent of his alcoholism and cocaine addiction, both finally defeated, and his incredibly draconian contract with Doubleday, which he was able to break only by letting them publish a book he hated, Pet Sematary. Though little critical commentary is provided, King’s various bestsellers are described and placed in the context of the events of his life. The subject, who was not interviewed for the book, neither authorized nor obstructed it. The author interviewed many friends and associates and quotes frequently from King’s published writings and interviews. Occasional repetition and internal contradiction prove minor annoyances. Careless editing allowed a whole sentence (“Steve and Tabby had fallen into a comfortable rhythm of spending half the year in Maine and the other half in Florida”) to turn up on both pages 219 and 226. Eight pages of photographs are interesting but limited, lacking a single shot of his wife or children.

The Mystery Writers of America’s Grand Master Award to Stephen King was controversial in some quarters. Anyone who doubts he’s a mystery writer might consider that Ed McBain and John D. MacDonald were among his earliest influences and (per Otto Penzler) his taste in detective fiction extends to P.D. James.

This Edgar-nominee is highly readable, efficiently organized, and most welcome.