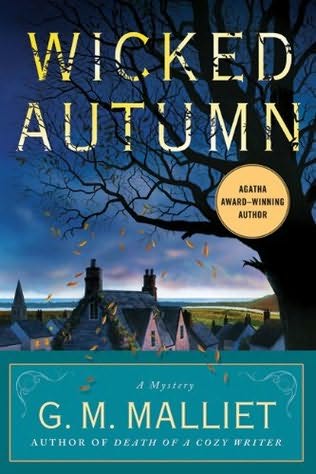 First, a confession: As an incurable Agatha Christie fan, I am immediately prone to liking a murder mystery that takes place in a small English village. That murderous intent exists in such a bucolic setting somehow makes the evil even more intense.

While no one recognizes hidden evil as well as Christie's Miss Marple, Malliet's Max Tudor is no slouch. As a former MI5 agent turned Anglican priest, he has a professional background that makes his investigative skills quite believable. While looking for peace after a traumatizing experience in MI5, his calm existence in the village of Nether Monkslip is interrupted by a suspicious death during the annual Harvest Fayre. Because of his background and his familiarity with the villagers, Max is asked to help the police with their investigation.

Unfortunately, since the victim was killed in the Village Hall which was open and not far from the Fayre grounds, anyone could have had access to the murder scene. Moreover, although the victim was not well liked, no one in the village seemed to have a strong enough motive for the murder.

Malliet is an Agatha Award winner for her St. Just Mystery series novel Death of a Cozy Writer, and like Christie, she knows how to establish characters and setting, develop a fiendish plot, an unusual method of murder, and sprinkle the lot with red herrings among the real clues. Where she differs is in her writing style. While Christie's plots moved swiftly thanks to her spare language and brief descriptions of character, Malliet describes people and places with more specificity. As a result, the reading is a bit slower, but we get to know the people and places better. And despite what I thought I knew about Nether Monkslip and its inhabitants, I was surprised by the ending. Wicked Autumn is the debut novel in the Max Tudor series and a winning entry in the quiet English village mystery genre.