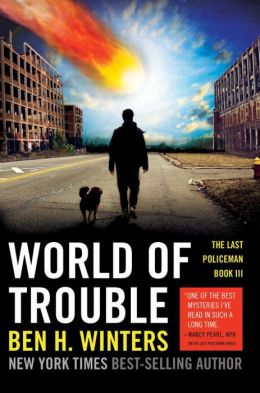 Apocalyptic trilogies have become so popular these days that many writers are banging them out with wildly varying degrees of success. But too many suffer from the “if-you-want-to-learn-what-happens-you-have-to-buy-the-next-book” syndrome, which means that none but the final book is truly satisfying. So thank heaven for Ben H. Winters, whose rare skill is to give each of his books the heft and weight of a standalone. We can pick up any one of these three masterful novels—The Last Policeman, Countdown City, and now World of Trouble—and experience a complete, and superb, read. But, oh, that wonderful series arc! To recap: In the Edgar-winning The Last Policeman, the world has just received the news that an asteroid will soon collide with the Earth, killing everyone. In reaction, most people either commit suicide or start working their way through their bucket lists. Few, including emergency workers, remain on their jobs. One of the only exceptions to this wave of deserters is Detective Hank Palace, who—while the world falls apart—continues to investigate crime. In Countdown City, as the asteroid nears Earth, little is left of civilization as we know it, but Palace soldiers on at his job, while stepping up the hunt for his vanished sister Nico. When last seen, Nico had joined a cult that believed it could stop the Doomsday collision. But now, in World of Trouble, the asteroid is mere days away, they have apparently failed, and worldwide chaos has increased. Still looking for Nico, Palace wanders through ruined cities and towns, hoping to be with his sister on the last day of the late, great planet Earth. During his search, he solves crimes, finds homes for orphans, and helps any distressed person or animal he comes across. One of the most unique aspects of The Last Policeman trilogy is its surprising sweetness, an element rare in apocalyptic fiction. That’s all down to Hank Palace. Although Palace can be tough, he is capable of great self-sacrifice. So almost as a gift to his gallant protagonist, at one point in the book author Winters lets Palace and his loyal dog Houdini catch their breath for a few days with a group of Amish who, because of their seclusion, aren’t aware of the impending apocalypse. This tender respite in Palace’s search for Nico gives him the courage to face whatever comes next—The End, or a last-minute miracle.