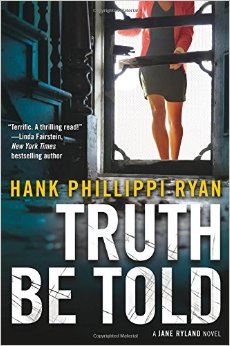 Greed seems to naturally find those who are in a crisis or tragedy, as one person’s misery often becomes another’s way to make money. That’s true of the housing crisis as illustrated in Hank Phillippi Ryan’s excellent Truth Be Told.

Boston newspaper reporter Jane Ryland has been assigned a story to show the heartbreak of home foreclosure. People who have saved all their lives are losing everything, their belongings pitched out on the front lawn. Meanwhile, neighbors deal with plummeting property values and unkempt, abandoned homes. But this human interest feature becomes a crime story when a woman’s body is found in a vacant home. This comes just a few weeks after a teenager fell from a second story, trying to retrieve personal items left behind in her family’s foreclosed home. The crime story evolves into an investigative story when Jane uncovers a banking scam more lucrative than any subprime mortgage.

At the same time, Boston police detective Jake Brogan is looking into the confession of a recently released ex-convict, who has just confessed to the long-ago murder of a teenager. It’s a case that Jake’s grandfather, also a cop, investigated many years before, but instead of closure, it raises more questions than answers about the 20-year-old crime.

Ryan’s storytelling allows these two plotlines to intersect in a natural manner, and gives readers equal time with Jane and Jake. Both are passionate about their work, about maintaining ethics, and about doing the right thing. Both also are compassionate in their dealings with others: in Jane’s case her sources, in Jake’s case his suspects. Jane and Jake are quickly becoming two of the most enjoyable series characters to spend time with, and readers who have rooted for them to give into their mutual attraction should note that their relationship takes a new turn in this third novel of the series.

A sense of reality permeates Truth Be Told, from the insider’s look at police work and newspaper reporting to the adept characterization of villains out to line their pockets—villains who are just ordinary people who seize an opportunity and throw out their soul with their hunger for money. And as Ryan so aptly shows, in many ways, that’s a crime much worse than that of any career criminal’s.