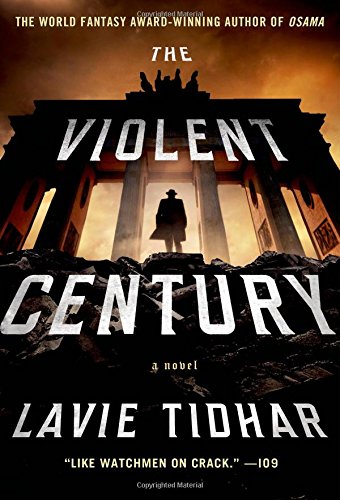 Don’t get me wrong. I love comics. Love ’em. But this clever retelling of our just-passed “violent” century, with its heavy emphasis on World War II, the Holocaust, and the Cold War, full of superhero derring-do baked right into the mix, didn’t quite do it for me. Still, I give it props for its ambitions, combining as it does history, comic books, B movies, detective novels, spy thrillers, and all sorts of other good stuff.

Following a never-quite-explained “change” in the 1930s, an unknown number of people develop assorted powers. Henry, an awkward, sensitive English schoolboy, becomes Fogg, able to control smoke and fog, while Oblivion has gained the ability to make things “no longer exist.” The two chums are recruited by the Professor Xavier-like “Old Man” into the government’s Bureau of Superannuated Affairs, where they develop their powers for the glory of “God and King,”—just in time for World War II. There is a balance of power of sorts, however, with most nations—including the Nazis—boasting their own “heroes,” so history proceeds along mostly familiar lines.

It’s all relayed in a series of brief, disjointed, present-tense snippets and sentence fragments that flick back and forth in time, as the Old Man interrogates the long-retired Henry about a botched operation that occurred in postwar Berlin over 60 years ago.

There’s much here to boggle the mind, with plenty of rock-’em, sock-’em action, and the author has great fun with countless pop culture shout-outs and potshots, while the fleeting meditations on heroism, friendship, loyalty, and that damned emotion (love, of course) give the book some unexpected, if fleeting, depth. And it’s great yuks when a bad trip (Hey! It’s the ’60s!) leaves Oblivion imagining the world as…a two-dimensional comic book.

But the choppy flashbacks fail to mask the often rudimentary characterization. After endless X-Men movies, The Watchmen, V Is for Vendetta, etc.—and especially Art Spiegelman’s Pulitzer Prize-winning graphic novel Maus—The Violent Century isn’t quite the head-spinner it might have been. Stripped of splashy Hollywood special effects, or the BIFF! BAM! POW! of illustration, the novel comes off as, well, nothing particularly novel. My suggestion? Wait for the movie.

Or better yet, the comic book.