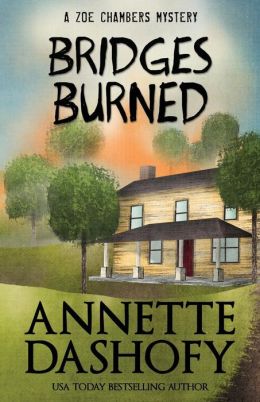 Annette Dashofy’s Bridges Burned brings back the gritty but compassionate paramedic Zoe Chambers, a woman who never flinches when she has to pull mangled victims out of car wrecks. In this recent installment (after Lost Legacy and Circle of Influence), her heart is touched by the suffering of ten-year-old Maddie Farabee, whose mother died in a fiery house explosion. Maddie’s father Holt had dropped the girl off at a babysitter’s just before the inferno. Thanks to this coincidence and rumors of her parents’ marital discord, Maddie is now in danger of losing both her parents—one to death, the other to prison. Convinced that Maddie’s father is innocent of arson, Zoe sets out to find the real criminal. This initial setup is enough to drive any mystery, but author Dashofy adds a twist. Zoe is so filled with pity towards Maddie’s plight that she invites the girl and her penniless father to move into her own home. This arrangement doesn’t sit well with her boyfriend, Police Chief Pete Adams. Jealousy isn’t the only problem here—Adams is as convinced of Holt’s guilt as Zoe is of his innocence. Adams’ own investigation uncovers the unsettling fact that technically, the Farabee family were squatters. They had been evicted from their home, only to move back in under cover of darkness. Threading everything together in this morally complicated mystery is the recurring question: What happens when decent, intelligent people—using both heart and brains— arrive at different conclusions? Bridges Burned is first and foremost a top-flight mystery, but what makes it truly shine is that it’s also an astute exploration of the human psyche.