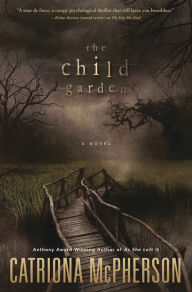 When Gloria Harkness answers her door on a late Monday evening, she finds an old school friend, Stephen Tarrant, standing on her doorstep, having what he claims is the worst night of his life. Despite not having seen him for years, she quickly becomes involved in an old childhood mystery—and a number of vicious murders.

Gloria is not your typical protagonist; the divorced mother of a special-needs child, she leads an isolated life at Rough House, located “10 miles between nowhere and nowhere else.” She spends her days tending to others, including her son, Nicky, and her landlord, Miss Drumm, who are both in a care facility. Despite this, she easily slips into the role of investigator in this psychological thriller, unwittingly putting herself and those she loves in danger. As she unravels the mystery of who killed April Cowan, a woman who used to go to school with Tarrant, she begins to unearth a Pandora’s box of other secrets, putting her in direct conflict with the killer as well as other townspeople who have things to hide.

While I originally found it hard to warm up to Gloria, her no-nonsense attitude, mother-bear protectiveness, and willingness to confront any issue earned my respect; and I, like many of the characters with whom she comes into contact, also underestimated her intelligence. As the story unfolds, it is a pleasure to see her world expand and her confidence grow, and to realize that, far from being a sheltered pitiable person, she is a force with which to be reckoned.

As the narrator of her own story, at one point Gloria says that looking back, if she had a crystal ball and could have seen her future, she wouldn’t change a thing. Having seen the strength that Gloria gained in her quest to find the truth, neither would this reader.