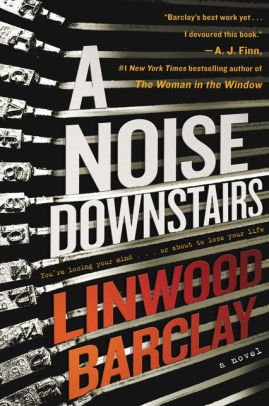 A Noise Downstairs, Linwood Barclay’s 19th thriller, is a twisty psychological tale centering on college professor Paul Davis. Eight months after Paul interrupted his mentor and West Haven College co-faculty member Kenneth Hoffman disposing of two murdered women on Connecticut’s shoreline, he is in a fragile state, recovering from the incident both physically (Hoffman hit him in the head with a shovel) and emotionally.

Paul has terrible nightmares about Hoffman, who is in prison for the murders, and his short-term memory is faltering. Paul forgets conversations with his wife, Charlotte, and also little things like dropping off or picking up the dry cleaning. At the suggestion of Charlotte and with the support of his psychologist, Anna White, Paul decides to write about his experience. He hopes the project will alleviate his own fear and anxiety by gaining an understanding of why Kenneth Hoffman murdered the women. But when Charlotte gives Paul an old typewriter, strange and inexplicable things happen. Paul hears typing in the night’s dark hours, and even stranger, the machine seems to be sending Paul messages from the two murdered women.

A Noise Downstairs is a satisfying and clever novel. The large cast and the story’s many moving parts—an unsettling sociopath prankster, Paul’s deteriorating mental health, a potential child custody fight with Paul’s ex-wife—perfectly set the reader up for the final climactic twist. The novel’s only downside, and it’s not much, is the sluggish beginning to the final act where everything is explained—what happened and why—which the reader has already guessed, but it’s this same exposition that ultimately sets up Barclay’s gratifying final surprise.

MysteryScene RT @craigsisterson: Looking forward to this! There've been some great 'Best of the Year' lists flying about lately, but I don't think there…
21h • reply • retweet • favorite