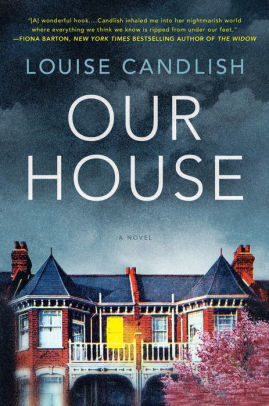 Our House is the stunning US debut for popular British novelist Louise Candlish. This is a mind-boggling, head-spinning, jaw-dropping domestic thriller as good as Liane Moriarty. It outdoes anything by Gillian Flynn, Ruth Ware, or Aimee Molloy.

The novel begins in an unsettling fashion when Fiona Lawson arrives at her redbrick double-fronted Edwardian home in an upscale London neighborhood one sunny January afternoon to encounter strangers moving in. All of her own furnishings having been removed and her husband Abraham has disappeared. Fiona suspects a phishing scam—if only she were so lucky.

Candlish’s high-tech narrative takes a unique approach to the standard marital drama with perspectives that alternate between 42-year-old Fiona and her podcast, The Victim, and notes from a computer document, a series of astonishing revelations, from her husband Abraham. Both sources are riddled with lies and misdirections.

Fiona and Bram do not have a happy marriage. After Fiona discovered Bram having sex with another woman in their backyard playhouse, she asked him to leave, but eventually established a “bird’s nest” co-parenting arrangement to raise their two young sons. The boys stay in the home while the parents alternate residency based on a somewhat complicated and carefully planned schedule. When not in the house, Fiona and Bram each rent an apartment nearby.

Their complicated marriage is further complicated by a car accident involving Bram, which leads to the death of a child. Bram drives away from the scene and tells no one about it, but someone claims to have seen what happened and an intricate blackmail scheme ensues.

Candlish makes the improbable perfectly believable, and few readers will be able to sort out all the twists and turns or anticipate the conclusion. In fact, there are so many secrets in Our House that it is difficult to avoid spoilers, but suffice it to say, if Candlish’s other 11 books are as solid as the all-engaging Our House, the author is about to have a very large American following.