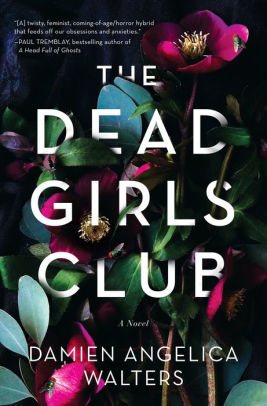 Damien Angelica Walters is an award-winning short-story writer, and her writing talent and horror roots are on display in her first novel, The Dead Girls Club. The first-person narrative is split between Heather Cole’s present and past, and the two versions of her are different enough to seem like separate characters. The reason isn’t a secret. From the very start, the reader is aware that Heather killed her best friend Becca and that death changed Heather to the core. Though Heather’s managed to continue with her life, marrying a contractor, working as a psychiatrist for troubled children, and even volunteering at a drug treatment facility, when someone sends her Becca’s necklace—one that should have been buried with Becca’s body—she is thrown back into her girlhood horror story.

The title of the novel comes from Heather’s young circle of friends, who were obsessed with the victims of grisly murders, the ones overlooked due to society’s morbid fascination with the serial killers themselves. Everyone knows Ted Bundy’s name, but few remember the names of his victims. The Dead Girls Club began with the intent to honor the forgotten, but soon became preoccupied with the lurid details of killing. Slowly Becca, the most creative of the bunch, begins telling stories of her own invention. The most gruesome is the tale of the Red Lady, a wronged witch returned from the grave to seek revenge on the people who killed her and who is said to help those who need her—for a price. As Becca becomes convinced that the Red Lady is real, and the only one who can release her from her problematic home life, the other girls are drawn into her delusion and its deadly conclusion.

The Gordian knot of Becca’s unsolved murder unravels slowly. Heather’s recollections of the event itself are hazy. What really happened that night? Why did her anonymous tormenter wait so long to act? While the adult Heather uncovers the past piece by piece as the threats to her hard-won, peaceful life escalate, it’s the perspective of young Heather and her traumatic coming-of-age tale that makes for the most compelling voice of the novel.

The book maintains an admirable tension between the natural and the supernatural, between what is real and what is imagined. It’s up to the reader to decide if the Red Lady was anything more than a story, but regardless, the tragic death of Becca lingers in this solid debut mystery.